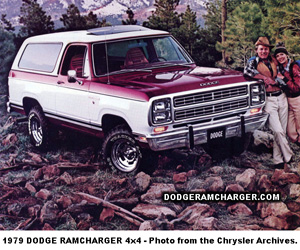 Our site features owner submitted Ramchargers, Information, Photos, Mopar Links, Screensavers and much more. We are always looking for Ramchargers to feature on this site! We welcome any Ramcharger. Get your Mopar truck added!

Our featured Dodge Ramcharger collection is a unique archive containing over 500 of these cool suv’s submitted by owners. To check out the complete collection or to view individual Ramchargers included visit here.

About the Dodge Ramcharger:

The Dodge Ramcharger was a large sport utility vehicle built by Dodge from 1974-1993, and based on a shortened-wheelbase version of the Dodge D Series/Ram pickup truck chassis. The ramcharger was primarily produced as a two-door, four wheel drive vehicle although a two wheel drive version was available.

The ramcharger was usually powered by a Chrysler LA engine, the most common was the 318 in (5.2 L) with the 360 in (5.9 L) and even big block RB 440 in (7.2 L) engines in the early years. As a full-size sport-utility, it competed with the Chevrolet K5 Blazer and the full-size Ford Bronco. A second generation ramcharger was produced in Mexico based on the second generation Ram pickup after 1994 but, it was never marketed for sale in the United States. 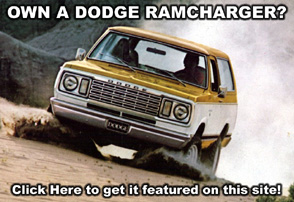